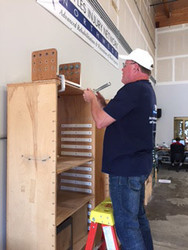 Monty Johnson has been a Journeyman Electrician for over 20 years. He enjoys being a residential electrician over commercial work, but there was one day last year he would like to forget. On February 5, 2016, he was standing on a ladder and pulling heavy wire overhead from one building to another. As he pulled hard on the wire, he felt a strong rip in his left shoulder. “I knew I damaged my shoulder, I could hear the tear, but I also thought I may have dislocated it.”

With the help of his apprentice co-worker, Monty went straight to the Emergency Room because he couldn’t lift his arm up.

Complications arose as his employer was a Washington company doing work in neighboring Oregon. Despite pain and a probable rotator cuff tear, he returned to work until his claim was opened several months later. Monty had a rotator cuff repair performed in July of 2015. Despite acute physical therapy six weeks later, he developed Adhesive Capsulitis (frozen shoulder) and required a Manipulation Under Anesthesia in March of 2016.

“I was impressed from the very beginning and I feel every injured worker with a heavy job should go through a program like this before going back to work,” Monty replied. “At PINN they knew what my job was and they set my goals in order for me to return to work as an Electrician.” “I always felt safe at PINN because they outlined a plan for me. I was nervous, but I saw the progression and knew I was going to be working at job related tasks.”

Monty started a work conditioning program on April 15, 2016 and graduated from Work Hardening on June 28, 2016. Monty started with restrictions in reaching overhead and at shoulder level. He started in April only capable of lifting 30 lbs from floor to waist, 15 lbs from waist to shoulder and 5 pounds from shoulder to overhead.  He was able to carry 20 lbs and had a push/pull force of 30 lbs.

After completing a progressive rehabilitation program combining physical therapy, manual therapy and therapeutic exercise with job simulation tasks, Monty graduated from PINN’s Work Hardening program with the ability of lifting 100 lbs from floor to waist, 100 pounds waist to shoulder, 75 pounds waist to overhead, the ability to carry 100 lbs and the ability to push/pull 50 pounds of force.

Monty describes the “attention to detail” that helped him the most in order to return to a heavy category of work. “It’s not just having the strength to lift overhead, the therapy staff showed me the little things that made it easier to achieve my goals. Things like technique, body position, hand placement, using the right form, etc.” “Over 80 percent of my work is overhead, I’m glad the focus was on simulating tasks that were overhead in nature. I even suggested some things they can try when future electricians come to rehabilitation. I want to be able to help other people with overhead jobs.”

Monty also appreciated that once he was discharged, he was free to come back at any time to work out in the clinic. I don’t want to lose what I gained. I had four previous back surgeries, so I have to exercise every day. Now I have to keep my shoulder strong.”

“I most appreciate that all I had to worry about was getting better. The front desk handled all of my paperwork and authorizations. The therapists worked with me to get me back to work. I was listened to and never had to stress about my claim.”

This is a great example of how PINN helps clients not only successfully return to work, but also relieve the client the stress of paperwork, authorization, documentation, etc.